SIGNIFICANT EVENTS DURING AND AFTER THE QUARTER 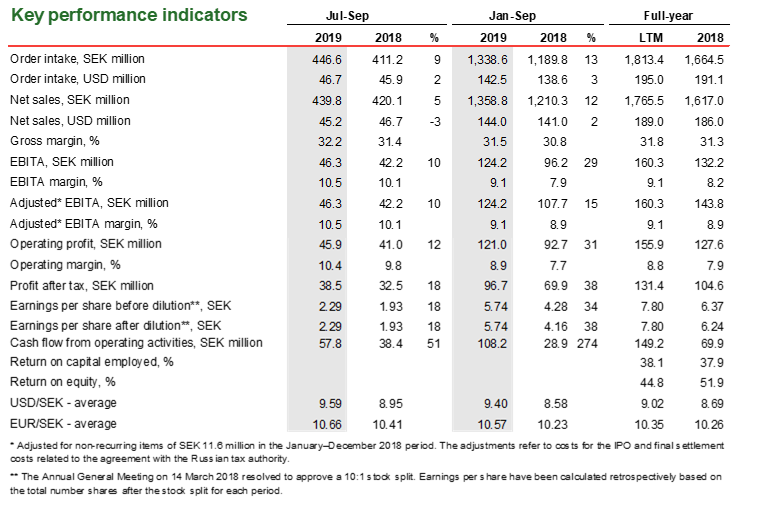 MESSAGE FROM THE CEO

NCAB continued to grow even if the pace has slowed down. Order intake is still increasing at healthy levels and we noted a rise in gross margin and EBITA margin. However, the performance among our segments differs more now than in the past.

Nordic remained strong, with good contributions from Norway and Denmark in particular. It is exciting that growth in Norway is so strong, which is derived from several different electronics companies. In Denmark, it is gratifying to note the highly positive impact of our acquisition of Multiprint and that our order intake has more than doubled year-on-year. Profitability in the acquired operation increased through the implementation of NCAB’s better purchase prices and terms of payment from our factories. Furthermore, the acquisition added a new factory partner.

The East segment also performed well, with a sharp rise in order intake and stronger earnings. The improvement in order intake is largely from domestic Chinese customers, where we have secured a number of major hi-tech projects as a result of our close collaboration.

USA remains challenging. Just as we were getting our own operations in order, higher tariffs were introduced. Many customers are delaying orders and hoping for a cut in tariffs, though unfortunately this no longer seems likely. Our new approved factory in Taiwan has potential moving forward, even if it has only contributed small volumes to date.

In Europe, the general slowdown of the industrial economy continued, with negative growth in most of our larger markets, not least in Germany. Despite this, NCAB reported year-on-year growth in this segment in most countries during the quarter. Furthermore, we have not noted any adverse impact on our gross margins and we have adapted the pace of recruitment to maintain our EBITA margin.

Overall, the Nordic and East segments offset the weak North America and Europe segments but we could nevertheless report continued growth – though at a slower rate than earlier quarters. Order intake remains strong. It is also gratifying to see the good synergies from our acquisition of Multiprint in Denmark are realized and that we have improved our overall earnings compared with the strong third quarter of 2018.

At NCAB, we have learned that an economic downturn also creates opportunities for us. Following the downturn in 2009, we grew sharply in 2010. Such times make it more difficult for domestic factories in the West, which may be forced to close, and can likewise affect smaller trading companies. This is an opportunity to gain customers and carry out acquisitions, which strengthens us when the economy recovers. Moreover, it can facilitate the recruitment of specialists. Our business model – to not own any factories – proves to be particularly good in times like these.

This is information that NCAB Group AB is obligated to disclose pursuant to the EU Market Abuse Regulation. The information was issued for on 6 November 2019, at 7:30 a.m. CET.